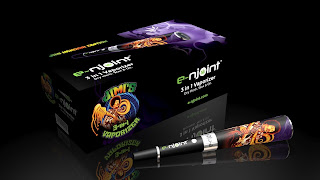 Dutch company E-njoint signed a contract with American company Purple Haze Properties to manufacture Jimi’s Vaporizer, endorsed by Jimi’s brother Leon Hendrix. Purple Haze Properties is a Hollywood-based company run by Andrew Pitsicalis and Jimi’s brother Leon Hendrix.Purple Haze Properties is the premier licensor of Jimi Hendrix products into the cannabis scene.  Purple Haze introduced Jimi’s Cannabis Collection this year to honor Jimi Hendrix. Jimi’s 3-in-1 vaporizer is a work of art that fits perfectly with Jimi’s collection.
Leon Hendrix states: “My brother would be so proud of this art piece, I wish we could have vaped together, because we all know how much Jimi loved that beautiful flower.”Jimi’s 3-in-1 vaporizer can be used for dry herbs, wax and oil and comes in a unique box with a range of accessories that include a cleaning kit, a dual car charger and even a power bank. E-njoint and Purple Haze decided that Jimi’s birthday would be a beautiful day to announce their cooperation for Jimi’s Vaporizer.E-njoint, based in the Netherlands, is known for manufacturing the world’s first electronic joint. Having gained considerable popularity throughout Europe over the past two years, E-njoint is now hoping to establish an even better following in the United States. E-njoint recently launched three new products developed especially for the US market. “We’ve received so many requests from the US about oil pens and vaporizers, that we’re happy to finally be able to meet the demand from overseas,” says Mark Rooijakkers, international sales manager at E-njoint. E-njoint recently opened a warehouse in Los Angeles and launched a US website (www.e-njoint.us). The contract to manufacture Jimi’s Vaporizer will help to bring E-njoint to the next level. It’s just a matter of time before the product will be available in stores across the United States.Jimi’s 3-in-1 Vaporizer will be available worldwide in January 2016. A special pre-order discount for dedicated Hendrix fans will be offered on Jimi’s birthday November 27th and will run until the end of 2015.Jimi Hendrix is the latest huge icon to join the list of celebrities who endorse marijuana. At the moment, celebrities like Bob Marley, Willie Nelson, Tommy Chong and Snoop Dogg are entering the marijuana industry and Jimi’s collection fits this scene perfectly.

Professional Salesforce Administrator for hire. Enthusiastic about Marketing Cloud, Social Studio and NPSP. Love to give back and support worthy orgs like It's All About The Kids. Father of 3 year old and 16 year old daughters. Into health, fitness, nutrition, tech and skiing.