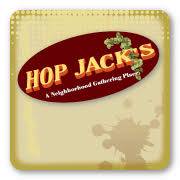 Seattle, WA…..July 26, 2015……..Hop Jack’s, “ A Neighborhood Gathering Place,”  recently opened its’ 11th location on July 13th in Kennewick, Washington.
“We are very excited about opening a Hop Jack’s in Kennewick,” said owner Mark Eggen.  “This site is a great space for a restaurant that is a true “neighborhood gathering place.“ We want to be the place where neighbors meet neighbors,” he added.
“We have hired approximately 80 employees for this new location,” said Kevin Eggen, Operations & Development Manager.  “The positions included bartenders, servers, cocktail servers, all sales support positions and kitchen positions.  We also have hired managers,” he added.  “With our company’s expansion plans, it’s a great opportunity to grow with us.”  We are currently in the process of interviewing and hiring for future locations as well.  Resume’s can be emailed to Director of Operations, Jeff Morgan at Jeff@Rocksolidrestaurants.com or apply online at www.hopjacks.net
The new Kennewick site measures 4,500 square feet, including bar space.   The outdoor patio will offer seating for approximately 40.
Hop Jack’s bar features 16 beers on tap, along with an array of specialty cocktails including the Hop Jack’s very popular icy drinks.  These playful drinks come in a variety of fresh fruit flavors and are served in a glass made of real ice.  A special device brought in from Italy produces the ice glass mold to fit inside of a real martini style glass.  Flavors include blueberry, pineapple, lemon and grapefruit.  Hop Jack’s is the only restaurant west of the Mississippi to serve drinks in this type of glass.
Another highlight of Hop Jack’s brand are its’ beer taps. The taps extension from the bar top are covered in ice and beer is poured from the tap at 34’. “This system is called a double glycol system and this is what makes the taps freeze over,” added Eggen.  “This is also very unique, found only in a hand full of restaurants in the United States.”
Hop Jack’s is popular for being a neighborhood place to gather with family and friends.  The menu’s main features include high quality hand formed 100% Angus beef burgers along with sandwiches, macs, salads, fish tacos and a variety of other entrees.  To view the entire menu visit www.hopjacks.net
The newest Kennewick restaurant is located near the Southridge Athletic Complex. General Manager, Shari Ivey, oversees the hiring, opening and operations of the new restaurant. Ivey’s dynamic management team has many years of experience in the restaurant industry and includes Kitchen Manager, Andres Zunigo Arevalo and Bar Manager Joe Fasching, along with Hop Jack’s Regional Manager, Mark Eilinger.
This newest Hop Jack’s is located at 4898 W. Hildebrand Blvd Suite A, in Kennewick, near the Southridge Athletic Complex.  The phone number is 509. 586.3777.
In August 2009 Hop Jack’s opened their first location in Bonney Lake, Washington.
Company wide, Hop Jack’s employs over 500 in the state of Washington with plans to add additional stores over the next several years.  Hop Jack’s current locations include Spokane at Northpointe, Spokane Valley Mall, Klahanie, Silverdale, Bonney Lake, Lacey, Lakeland Hills, Lynnwood, Maple Valley and Richland.  Further 2015 plans include additional expansion in western Washington north of Seattle near Smokey Point.
Hop Jack’s has won several awards including The National Restaurant Associations “Good Neighbor” award, “Best Burger’” by the Maple Valley Reporter and “Best Burger” by South Sound Magazine.  Most recently for 2015, Hop Jack’s was awarded the Washington State SBA Entrepreneurial Success Award.
Hop Jack’s donates a percentage of sales from various promotions throughout the year to charity.  Primarily funds are for their own Hop Jack’s “Good Neighbor Fund,” which is a fund set aside for team members and guests who are in need.  In 2014, Hop Jack’s raised over $50,000.00 and donated it to worthy causes including Susan G. Komen Puget Sound and the Seattle Cancer Care Alliance to benefit prostate cancer research.
Hop Jack’s is open weekdays 11 am to 11 pm. Friday and Saturday the restaurant closes at midnight.  Happy Hour is offered in the bar and dining room daily 2:00-6:00pm and 9:00pm to close.
On Saturday and Sunday the restaurant serves breakfast from 8:00 to 11:00 am.
History of the name Hop Jack’s, taken from the Hop Jack’s website:
Hop Jacks were people who worked to pick and produce dried hops to be used in the beer brewing process. They gathered in barns throughout farming regions around the world during the planting and harvest seasons. They were hard working folks, that according to our exhaustive research, (OK, we talked about it once over a cold beer!) had a strong sense of community and enjoyed a cold one from time to time.

Our restaurants’ design and menu were built to reflect an atmosphere for special hard-working people. It’s a place where friends and neighbors can gather to enjoy a really cold beer, unique beverages and some great food in a comfortable, fun, safe, and familiar environment.
46.2112458-119.1372338

It’s All About the Kids Food Pantry in San Diego Needs Your Help!