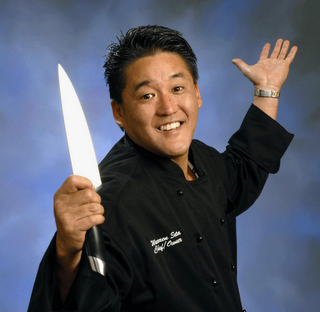 Seta will be chef at the new Yama Japanese fusion cuisine restaurant slated to open in late October on the third floor of the Galleria, 550 106th Ave. N.E..

The cooking demonstration will be interactive between the two nationally recognized chefs. Chef Seta will be preparing a dish that won several national accolades at his former restaurant.

Originally from Hawaii, Seta has over 25 years experience in the restaurant business. In 1981 he left Hawaii, and in 1996 acquired the well-known Las Vegas Japanese restaurant, Mizuno’s Japanese Steak House, located at the Tropicana Resort & Casino. Under his direction Mizunos was voted “Best Restaurant in Las Vegas,” as well as one of the top ten in the U.S. by the National Restaurant and Hospitality Group.

Seta opened Malibu Chan’s in November 1999. It soon became recognized as the hip restaurant in Las Vegas, with its signature menu focusing on comfort foods infused with the flavors of Asia and the Southwest. Since then Seta and the restaurant have received numerous awards and accolades, including the Millennium International Award of Excellence as one of America’s great chefs.

Executive chef Warren Seta, former chef/owner of Mizuno’s and Malibu Chan’s in Las Vegas was sought out by Yama Restaurant owner Alex Han. He wanted to ensure his restaurant would quickly gain regional and national attention as the “best of the best” in sushi and grilled fish infused with creative compliments, i.e. rock shrimp tempura fondue. The concept created by Han immediately captured the attention of the nationally recognized restaurant developer / renowned chef.

Yama Restaurant is slated to open in late October in Bellevue’s Galleria, 550-106th Avenue N.E., third floor. The Japanese restaurant, the Pearl of the Eastside will feature sushi and grilled seafood on the lunch and dinner menus. For or more information, contact (425) 453-4007 or www.yamasushibellevue.com.

It’s All About the Kids Food Pantry in San Diego Needs Your Help!